Article: The Sources of Growth in a Technologically Progressive Economy

ABSTRACT: We develop new aggregate TFP growth estimates for the United States between 1899 and 1941, and sectoral estimates at the most disaggregated level so far, 38 industries. We include hard-to-measure services, and a refined measure of sectoral labour quality growth. The resulting dataset supersedes Kendrick (1961), showing TFP growth lower than previously thought, broadly based across industries, and strongly variant intertemporally. The four ‘great inventions’ that Gordon (2016) highlighted were important but less dominant in TFP growth than their predecessors in the British Industrial revolution. The findings also make it unlikely the 1930s had the twentieth century’s highest TFP growth. 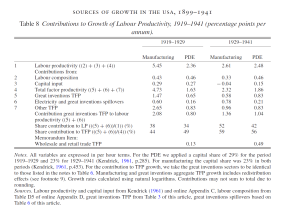 The datasets and a full description of the sources and methods used for this paper are available below:

One thought on “Article: The Sources of Growth in a Technologically Progressive Economy”